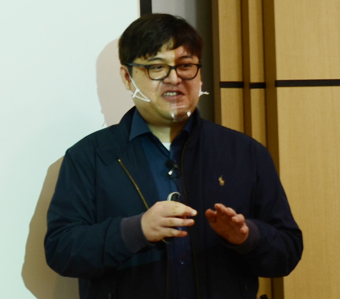 On Thursday, June 24, the second special lecture on the student success story of graduate students was held at the 2nd Engineering Center, Natural Sciences Campus. Professor Keum-Chul Eom, the speaker, was appointed as an assistant professor of Global Business Administration Department at Gachon University last year after completing his doctorate in marketing major at Department of Business Administration. In this regard, he gave a lecture on “Foreign Professor’s Tips for Surviving Graduate School.” The special lecture was held online via Webex due to COVID-19.

About the graduate school

Prof. Eom divided his graduate school life into three main categories: taking class, researching, and lecturing. In the course of taking classes and studying, the most important thing is to secure time to fully understand and absorb what you have learned. Because he was a full-time student during master’s program, he was able to focus enough on studying. He said that researches in graduate school can be largely divided into master’s and doctoral researches. Research during the master’s course is mainly preparing for Ph.D. program, and research during Ph.D. program is mainly focusing on publishing good academic papers, participating in domestic and international conferences, and exploring majors in depth.

During his graduate school year, he prepared for lectures. To provide well-organized and high-quality lectures, he studied teaching method and tried his best to make his lectures more effective and interesting. As a result, he was recognized his efforts and selected for Excellent Lecturer in 2018 based on course evaluation. Generally, graduate program can be a process of gaining competitive experience for their career. Prof. Eom has gained experience in effectively appealing his academic abilities and potential through conference and network with seniors and juniors.

Struggles of being a foreigner

There have been many restrictions and difficulties to be a lecturer until I become a professor after completing master’s and Ph.D. programs. Frist, language barrier was the most fundamental and great difficulty. He tried to learn Korean at the level where he could conduct academic research by reading and writing news every day, which allows him to learn non-colloquial terms than informal terms. He always did his best to make sure that he was not undervalued because he was a foreigner with an aim to be better than Korean classmates. He said that he needed to understand Korean society itself in order to study more reliably and effectively in Korea. To fit into Korean society, he tried to have more daily interpersonal relationship with people and he still accepts all interpersonal relationship as an opportunity to understand Korean society.

Efforts to become a professor

He defined himself as a researcher and educator and said that he should not neglect either roles. Most people who became professors have been studying for a long time, so they may get used to do research or they may neglect the existing tasks in order to focus on the new role as an educator. Under this circumstance, he emphasized that they should not forget that they are researchers and continue to focus on research. He also advised that they should do their best with their job with dignity because being an educator has a meaning of conveying refined knowledge and contributing to the development of the academic field through the process of their research. Prof. Eom said that he always reflects on himself to become a good professor and tries to reduce the gap between ideals and reality.

Advice from a graduate school senior as a foreigner

Prof. Eom advised listeners to know their path. He said that updating and organizing resumes is a meaningful process to understand oneself objectively and get motivated to grow, thus this simple task should not be neglected. In fact, he also updates his resume every month and always tried to be a well-prepared person. In addition, he emphasized the importance of having desire to help others or organizations. He talked about his experience of making greater progress when he wanted to be a person who helped others or organizations. He also added that we should think about ourselves and the world together because we can never disregard the influence of others in the process of self-development and research. Finally, he said he wanted to tell juniors that keeping the seat in the lab is the beginning and end of everything and that if they do, they will achieve their dreams.