Study Abroad and Get a Job in Finance 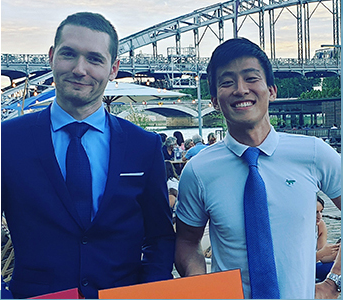 Jae-Hong (Alumnus, Dept. of Business Administration) got an internship opportunity at Morgan Stanley’s Paris office as an international student for the first time. He is currently doing his master’s degree program in management (grande ecole) at HEC Paris which ranks as the number 1 business school in France and in Europe. Also, he is currently working as an intern at Morgan Stanley Real Estate Investment Private Equity’s European team, Paris office.

He spent ordinary undergraduate years except that he had lots of friends who are exchange students after he returned from military service. He still keeps in touch with them. Sometimes, he took elective courses more seriously than his major courses. It’s not the same as before due to COVID-19, but he still remembers the time when he had so much fun his close friends, including exchange students at the bar until late night during the university festival.

His internship experience in France was the one of the main reasons he chose his career in finance. In France, students can do internship twice, 6 months each, during a gap year between first and second years of the master’s degree. He worked as an intern at IBA in France for his second internship. Through experiencing two different internships, he realized that the job in finance was more suitable for him.

His master's degree and experience of internship highlighted him at the job market. In addition, his various extra-curricular activities were appealing to the job interviewers. When he was in Korea, he was a player of mixed martial arts for a short period of time. Since this kind of activity is not a common activity for master’s student of business school, so it drew interviewers’ attention to him. When he went to France, he organized two student clubs. People were curious about him because he spoke fluent French even though he was a new-comer in France. During his undergraduate, he went to Berlin twice for exchange program and it added one more line on his CV. He speculated that these small activities, which seemed unrelated to the financial sector, had gathered to make his resume stand out among a number of other applicants.

He decided to participate as a speaker of the Student Success Story because he wanted to give information that he has to juniors. When he was preparing for a study abroad in between 2016 and 2017, there was not much information on studying in France. There was no network with seniors, and the information or tips available on the internet was limited, so it was difficult for him to know what to prepare. Even in France, the Korean society, especially in finance field, was very limited, he had to go through everything by himself, unlike other student who went other countries to study abroad. For him, giving the information he knows is not a difficult thing to do. He thought some of his know-hows and tips would help other students who are preparing for study abroad.

His current goal is to learn as much as possible during his internship so that he can get a stable job in the future. In Europe, interns work just like full-time workers. His long-term plan is to be in a position where he has ability to help other Koreans who are coming to France to study. Additionally, his personal hope or ambition is to become a partner or a managing director (head) of a large private equity fund in Europe.

An advice he would like to give to students who are planning to get a job overseas or study abroad is that “It is not easy. In fact, studying abroad or getting a job overseas practically costs more, consumes more time, and requires efforts, but I hope you work hard with hope that you will achieve your goal eventually. I also wrote more than 100 resumes every semester. This time, I wrote about 230 applications with a sense of desperation and I strongly believe that I will eventually fulfill my dream if I keep working hard. Things don’t always go as planned, so I’d like to say that it’s most important to keep on challenging yourself without dwelling on your failure.”