Everything is a Challenge 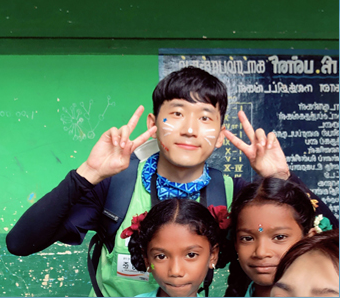 Youngjun Lee thinks that a ‘real’ college life is to challenge himself. It means that students should find a meaning from experiences gained from challenge, and lead to new challenges. He has challenged a number of things himself throughout his college life and is still challenging.

The Beginning of University Life! ‘Let’s do everything we want to do”

When he entered the university, he felt fear rather than joy and excitement! In the mean time, he was encouraged by his colleague in class and decided to do well in university. When he thought of what to do for a fruitful university life, he got to know a ‘Suggester’, the ambassador for university development. Suggester is a student association which prepares creative project to develop the university. In addition to regular projects, it was a center organization of university  that assisted events such as mentoring camps for students, and school festivals. As a first step toward many challenges, I applied to Suggester and started to work as a ninth group member.

While working as a Suggester, I worked on many projects with seniors. We carried out projects selected based on students’ opinion, such as a shuttle bus demand survey and a school drinking control campaign. We also decorated roads in front of Samsung Library and opened convenience facilities in school. Through these projects, we improved the inconvenience of the school.

After returning to school after being discharged from the army, he went to Chennai, Indonesia to volunteer. My team made cement to lay the foundation, which is the most difficult step in building a house. In addition, we practiced Talchum (dance while wearing mask), painted face painting on kids’ faces, and made character shirts for cultural volunteering. He built a house in the hot sun during the day and poured his passion into dancing Talchum at night. At the end of all the volunteer work, I had a time to reflect on the true meaning of volunteer, while looking at the foundation of house we built, Talchum we performed in front of residents and volunteer group, children playing with face painting on their faces. It is a difficult time to get a job, so students are trying to gain a lot of experience. However, I believe that if challenge yourself and perform activities with your genuine heart, you will get more valuable experience than one more meaningless line on your resume.

What to consider first as an engineer

As he became the third year of university, he started to challenge himself to find out suitable career path. He joined the automobile club called ‘Heaven’ to deeply study mechanical engineering, his major. However, he worked in an electric team, instead of a mechanical team where team members are required to use knowledge on mechanical engineering. He thought he needed an understanding of the system as well as ability in design when it comes to automobiles and robots. Thus, he wanted to find a field he wanted work at while strengthening his abilities in various fields through projects. And he chose to work in the electric team in order to understand the system and learn software. While he was learning circuit and software through Arduino, the team recruited a technical team to participate in the technical idea section of the 2019 College Student Making Automobile Competition. Since he was interested in applying his ideas to vehicles that were manufactured by himself, he set up a technical team with his team and prepared for the competition. However, there was already a lot of technology in the world and his team was having idea meetings only for three months. During the research, his team learned that car accidents frequently occurred due to sun glare and overloaded cargo truck. To solve this problem, his team developed ‘light control system using the principle of polarization’ and ‘safety loader notification of cargo trucks’.

The team consists of electronic and electrical engineering and mechanical engineering students were able to build automotive system using their knowledge. In addition to design, he also worked hard to demonstrate technologies by developing software capabilities. They participated in the competition while cooperating each other day and night. Through these efforts, the team won the Best Excellence Award in integrated section of the competition.

Beginning of a dream to become an AI engineer

In the first semester of his 3rd year, he prepared a technical idea competition and Sungkyun global creative challenger at the same time. So, he had to run to the Incheon International Airport a day after the automobile competition. It is no exaggeration to say that his entire vacation and semester were devoted to competition and study. The reason why he did so much is because he wanted to find a dream. When he was in his 1st-2nd year of university, he wanted to grow through extra-curricular experience and when he was in higher year, he wanted to study system through his major and technical competitions.

Through the Sungkyun global creative challenger program, he carried out a project under the theme of “Promoting the Introduction of Smart Farms in Korea”. It’s because he became interested in AI through logistics automation and data analysis used in smart farms. He wanted to be an “AI engineer” to apply the knowledge and experience of his major to the system construction. As he set his goal, his challenge became clearer. In the fourth grade, he studied hard on the theme of “Development of a Machine Learning Model-Based Spot Weld Quality Non-destructive Testing System’ through S-Hero, and he put his passion toward his dream.

My definition of ‘Student Success’– Challenge, Experience and Achievement

My definition of ‘student success’ is to set my own values as a college student, challenge, experience, and make my own unique achievements.

“Study during semester and do other things during vacation”

It’s the advice that my mentor gave me when I went abroad to volunteer. After hearing this, I challenged myself to find a dream for four years. During the semester, I studied my major through and during the vacation, I learned something and gained new experiences through participating in contest or traveling abroad. My mentor also said that learning from books is important, but learning from the world is unique experience that only oneself can earn. So, he told me to challenge everything.

His challenges have not always been successful. There have always been stories of failure that have not been introduced, and even if the results were successful, there were failures in the process. I felt accomplished when I overcame my failure and as I kept challenging new things that I wanted to do, challenging became my habit. I thought about what to challenge today while browsing school notices every day. I am graduating soon, but I still look up things I can try before graduation. Today, I continue to challenge for new achievements and new success.

[Editor: This is the edited version of story written in “2020 Our Successful Stories”]