SAINT was founded on March 1, 2005 as one of the core programs of Sungkyunkwan University's VISION to be ranked in the top 100 universities in the world.

In partnership with financial support from Samsung Advanced Institute of Technology (SAIT), the Institute’s goal is to become one of the top 5 nanotechnology-related institutes in the world. To achieve its goal, the SAINT developed an infrastructure, recruited the best researchers and initiated networks with worldwide nanotechnology conferences, published a SCI-level journal, and established a graduate school dedicated for nanotechnology research and education.

Considering the potential impact of nanotechnology on future economic growth, it is one of the top research priorities in many countries including Korea, because advanced countries need to exploit their future technology. SAINT will play a crucial role and generate edge technology in this field. 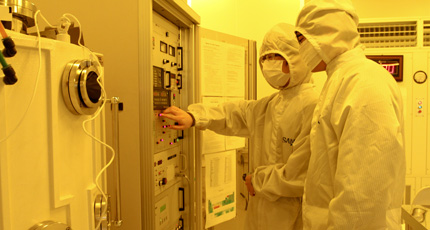 The Institute’s mission is to educate and train students who will become leaders in the next generation of global industry advancement. To accomplish this we have recruited world class researchers with well-equipped research facilities.
The Institute’shigh quality tutoring system encourages students to excel inthis fascinating field. The Institute has made great strides in the field of nanotechnology, and is always on the lookout for motivated young graduate students who recognize the importance of its mission and goal.

“TOP 5 in Nanotechnology Institutes in the World”
Global & Creative NT Frontrunners Leading Future Nanoscience and Technology
The SAINT will be the main educational center for producing future creative global nanotechnology leaders. We plan to arrange educational programs to satisfy social needs for nano science and technology and offer a systematic education focusing on nanotechnology related fundamental sciences and applied technologies. We also plan to organize successful industry-academia co-organized programs to help spur a new industrial revolution through nanotechnology with Samsung
To be the Best Institutes in Korea and One of the World Top 5 in Nanotechnology
SAINT strives to have outstanding faculty members with profound knowledge of Nano-theory, including internationally recognized researchers in the Nano-arena and research professionals active in industry. We will also provide a practical, hands-on education in the modern facilities of the Korea Advanced Nano Fab Center. With our world class faculty members and facilities, the SAINT aims to be the number one Institute in Korea and among the top 5 internationally in this field.